2017 was a busy time for Sydney Ensemble contributing their music to interesting events, fabulous venues & wonderful clients. Here is a Top 10 Best Events 2017 of our favourites throughout the year. We look forward to more interesting, flamboyant and creative gigs in 2018!

Opera Point Marquee has one of the most unique views of any beautiful city, and is the perfect backdrop to an evening reception. Many international guests were in awe of the best Sydney has to offer. The wedding reception was catered for by Matt Moran’s Aria Events. The string quartet performed for the bridal party entrance, cutting of the cake and first dance. This wedding reception was on of the last events before the venue was removed for extensive renovations which commenced in Mary 2017.

Cosmic Shambles is a live variety show of science, comedy and music which toured across Australia and New Zealand. It was hosted by Robin Ince in the historic Enmore Theatre, and included special guests including scientist Dr. Karl Kruszelnicki, comedian Peter Berner, SBS presenter Lee Lin Chin, and musician Diesel. We performed as a string quartet the Cosmos theme song ‘Heaven & Hell’ by Vangelis, and accompanied Diesel for his hit song ‘Tip of My Tongue’.

What a truly magnificent event! The Palm Court Tea Salon is housed in the historic Mansfield House on High Street in Maitland. Built in 1887 as as bank, it recently endured a 4 year restoration to become the Palm Court Tea Salon. Huckleberry Campbell is the host and for the Titanic - Ship of Dreams Gala High Tea who faithfully reproduced the Titanic menu for the event. During the high tea the events that led to the sinking of the ship were reenacted, as was an actual recording of the Titanic’s horn.

We performed string quartet music that was played on the Titanic and the Gilded Age which included waltzes from the White Star Line Titanic Songbook, Nearer My God to Thee, My Heart Will Go On, music from Alexander’s Ragtime Band, and Ode to the Sea- which was written as the theme song for James Cameron’s Titanic movie in 1997.

In early 2017 we were contacted by composer Wayne Threadgate and asked to play his first string quartet composition. After several rehearsals we got it together and Wayne proposed a concert performance to raise funds for Beyond Blue.

The concert took place in the theatre of the RAAF base in Williamtown. Our concert program consisted of:

Adagio for Strings' by Samuel Barber

String Quartet No. 1 by Wayne Threadgate

Several moving speeches were presented by RAAF staff about experience with managing mental health, and how Beyond Blue provides information and support to everyone in Australia. Our performance was received with overwhelming positivity and we have been invited to perform again in 2018. After the concert were were treated to a tour of an aircraft hangar and an inspection of a F/A-18 Hornet fighter jet.

We look forward to presenting another concert and possible including more musicians in 2018.

Founder and patron Deborra-lee Furness hosted the 10th adoption awareness event at Kirribilli House. Adopt Change is a charity that works with communities and governments of Australia to improve adoption in Australia. We played a mix of classical, jazz & pop throughout the invitation-only cocktail event. After speeches guests were treated to a performance by classical violin virtuoso Sally Cooper. Several special guests included Hugh Jackman & The Hon Pro Goward.

Serenade Under The Stars - Christmas

With an amazing view of the Sydney Harbour Bridge and Sydney Opera House we had as we performed in the Altitude Restaurant on level 36 of the Shangri-La Hotel. With an elegant ceremony taking place the bride who was a teacher had her class students from school be part of the special event. The young students from her school were very excited to see their teacher getting married at such a location and also be part of the ceremony reading out their best wishes for her and the groom to all the guests.

This was a heart touching ceremony.  The staff were wonderful and we loved performing a beautiful choice of songs. Also very happy to have Bells n Whistles book us for this event.

Newcastle Club - formally opened in 1995 - is on of the oldest private clubs in Australia. The currently Club House with brand beaux architecture was formally opened in 1924 by the then Governor General of Australia, His Excellency Lord Forster. The club offers old fashioned service in an elegant, sophisticated atmosphere. The club was the perfect backdrop to a 1920’s themed fundraiser for Camp Quality.

Guests were impeccably dressed in clothes reminiscent of the Great Gatsby era and greeted with champagne on arrival. The string quartet dressed for the occasion and performed music of the Gilded Age including ragtime and waltz music. During the night dancers who were were disguised as wait staff created a flash mob and danced the Foxtrot, Shimmy & Charleston to the surprise of guests.

The quartet performed the String Quartet in Bb K.458 ‘The Hunt’, 1st movement, by Mozart. The music was then picked apart in conversation with David Banney, in the same style as his weekly segment on ABC 1233 called ‘Banney’s Banter’. 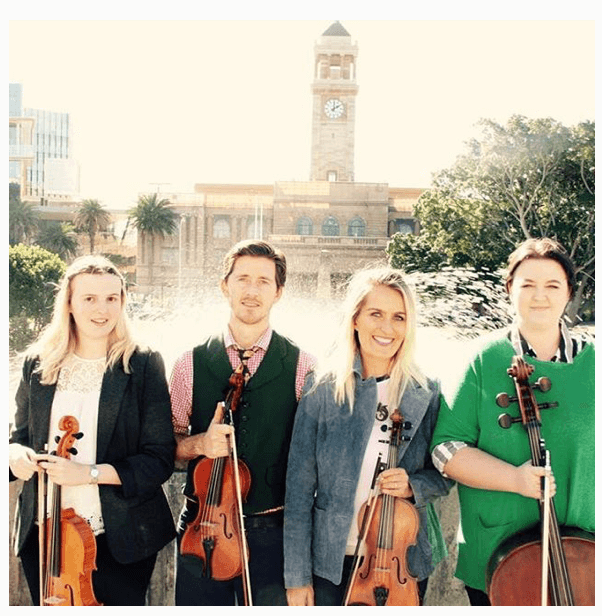 Singapore Airlines unveiled its all-new cabin on boat its A380 fleet. They also celebrated